As part of our inspiring buildings series, MEB Design Architect Maggie Forrester reflects on her recent visit to the Mile End Park in Tower Hamlets, London. Check out her blog below.

Mile End Park was first conceived after the Second World War to replace an area of extensive bomb damage, but was eventually constructed using Millennium Funding from 1995 onwards and fully opened in 2004.

The Green Bridge at its centre, designed by Piers Gough, was built in 1999 over Mile End Road to connect the two halves of the park. See map via the link. 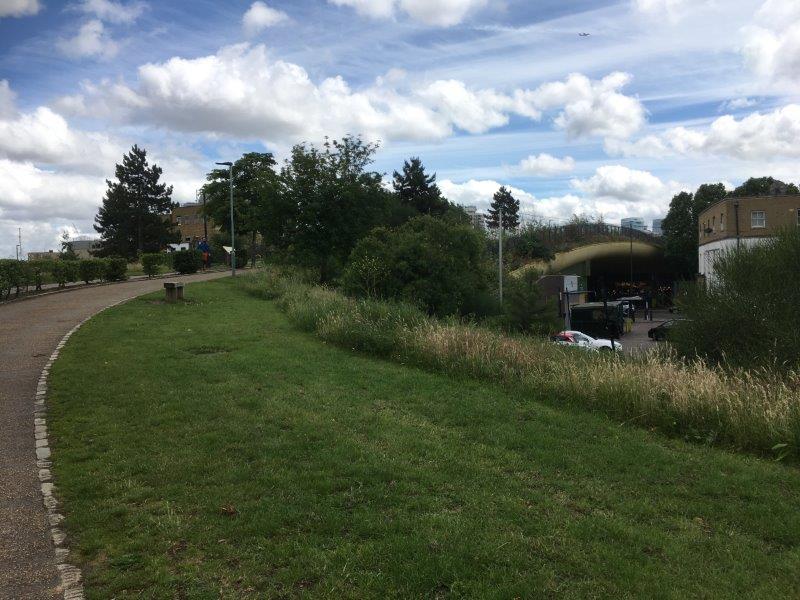 The park has won the prestigious Green Flag Award on a number of occasions and most recently 2016 /2017.
The linear park covers an area of 32 hectares and includes a winding cycle path and footpath over the bridge connecting the Ecology Park with the Ecology Pavilion, Art Pavilion, the canal as well as children’s play areas and other activity spaces. 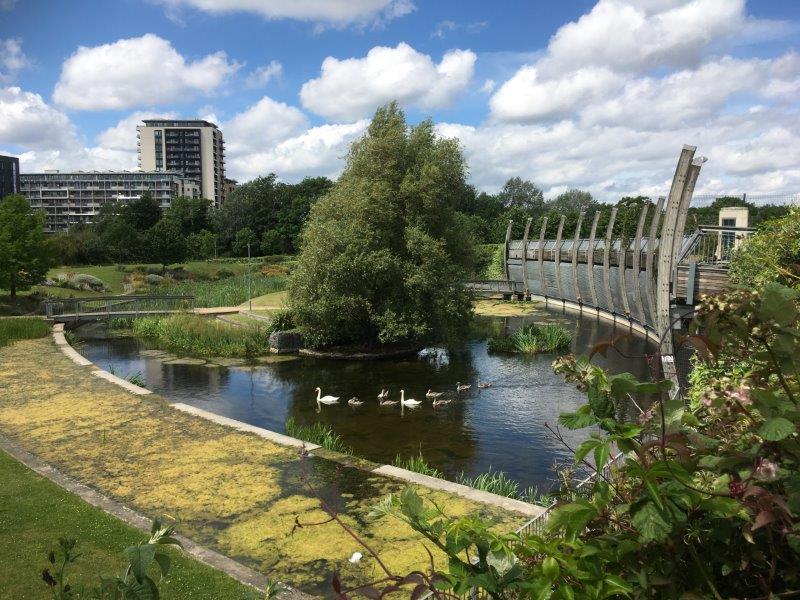 The Pavilions set in the landscape, surrounded by water provide an oasis for nature in the middle of the city. The Ecology Park supports a fantastic diversity of wildlife, including birds, butterflies and bees. Over 400 species of beetle have been recorded and around 170 types of spider. 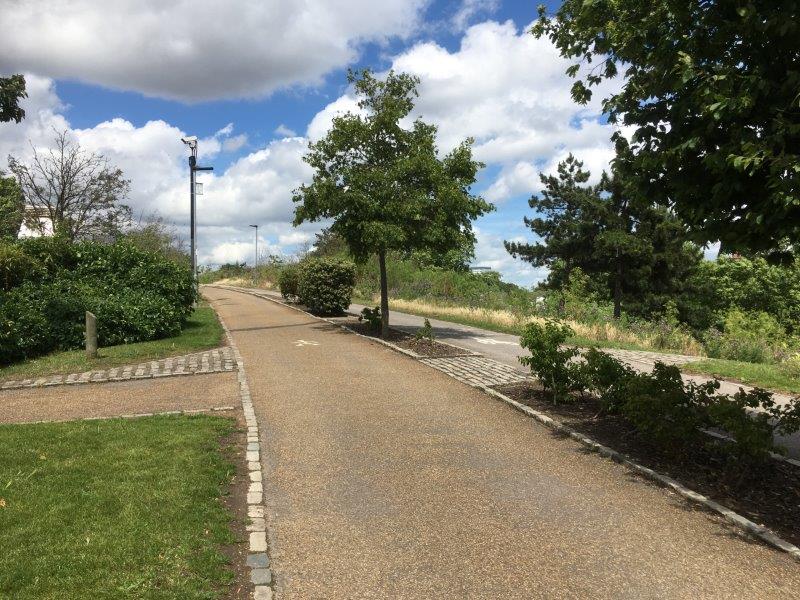 The materials and surfaces have been used to delineate way finding through the spaces and beyond, providing easily readable routes to each landmark. Further consideration has been given to inclusive design ensuring accessibility is provided throughout the park. (A set of maps are available to provide a step-free journey from Mile End Underground Station to the Children’s Park and Art Pavilion). 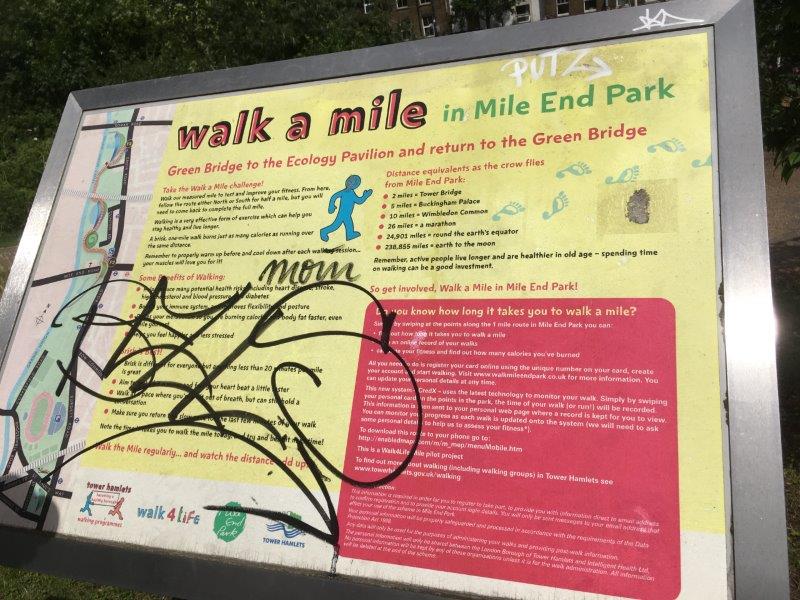 Unfortunately, graffiti is present and highlights the lack of maintenance which was noticeable in other areas too. The park is open 24 hours a day so some mischief is inevitable, although largely the spaces seem to be respected. Some elements of design (such as planting behind fencing, lighting and signage) could have been designed differently to improve the situation. 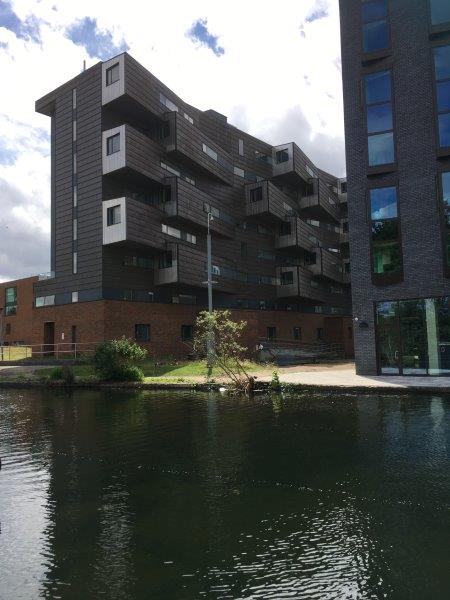 The park has clearly been a catalyst for change. The newer surrounding architecture, comprising a college and residential buildings on the other side of the canal, responds to the park and makes the most of the views over the landscape. 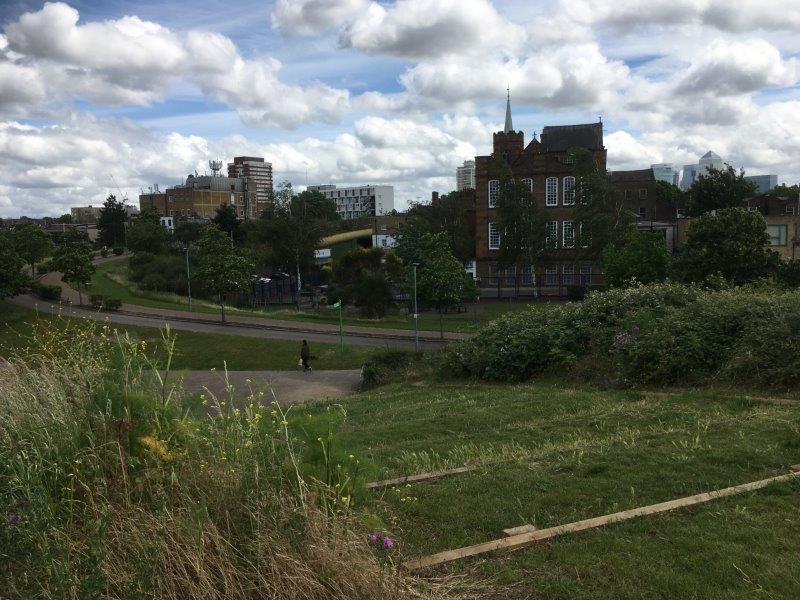 The park weaves its way between old and new – Mile End Road is barely noticeable and buildings such as the nearby Church peak over the planting. This open air amphitheatre offers views back over the Green Bridge, to Tower Hamlets and Canary Wharf beyond.

This great piece of landscape and urban design connects communities and crosses historical boundaries.
For further information on Mile End Park can be found here.